Do I Have to Appear in Court or Can My Attorney Appear for Me? 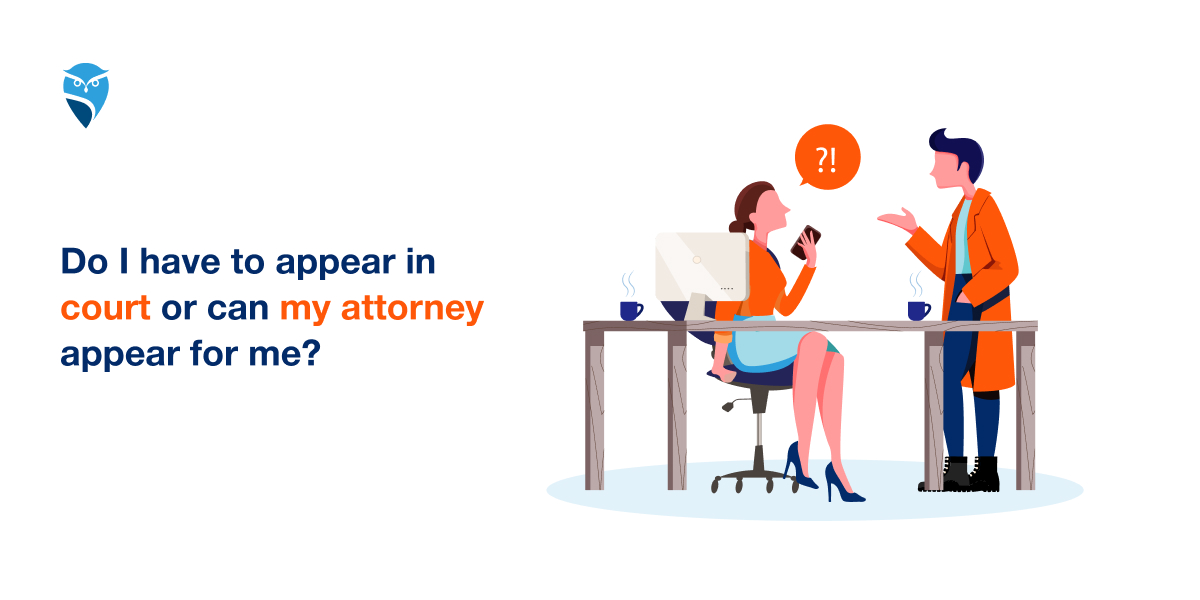 There is no one answer to this question. Depending on the essence of your charge your attorney may or may not appear in court without you. Let’s look through the cases when you must appear in court.

If you are a perpetrator of a misdemeanor, your attorney is allowed to appear in court for you. He/she may defend your rights without your presence on your behalf at all stages of your case. But, if your charge is brought for a felony you must take part in all stages including arraignment, plea, preliminary hearing, parts of a trial, and sentencing at the court with your attorney.

Though we mentioned that you may not appear in court in the case of a misdemeanor, nevertheless there are cases of such offenses when your participation is a must. Let’s have a look at some of them:

Consequences if You Fail to Appear in Court…

When you fail to appear in court you automatically violate the court order or a ticket citation (depends on the case). But, appearing in court doesn’t mean that you are undoubtedly an accused or suspect of a criminal deed. There are some other reasons as such:

When you fail to appear on due date and time, the court charges you with Failure to Appear in Court.

What is a “Failure to Appear in Court?”

This is a violation of a court order treated as a criminal offense which may lead to criminal charges. As the laws and regulations differ from state to state, this failure may be treated either as a misdemeanor or a felony. If you live in a state where the failure to appear in court is considered as a misdemeanor, you may be either fined or imprisoned less than a year in a country or local jail. If your state law defines your act as a felony, you will carry your punishment in prison for more than a year. Do you think this is the end of the story? No! In addition, you will get the charge regarding your initial offense too. The charges may include:

What to do Then?

To avoid any additional punishment for failing to appear in court and not take it as an intentional deed, you should submit a valid reason to the judge for not showing up. Valid reasons for not appearing in the court are as follows:

Consult with a Lawyer

Of course, the list above can be continued, but one thing I would like to mention is that even if you are in such a case when your attorney may appear for you but the judge demands your attendance, always appear to avoid miscellaneously. Or else otherwise consult your attorney who will tell you whether he/she may appear on your behalf or not. If you don’t have an attorney yet, again choose the variant “appear in court” if your case doesn’t fall within valid reasons not to appear.

Find Your Lawyer with AppearMe for Consumers

AppearMe For Consumers provides everything you need to find the right lawyer for your case. All you need to do is visit our website and submit a request to find a lawyer with the right experience and expertise to explain the options available in your legal matter.

Do You Have to Be a Lawyer to Represent Someone in Court?

The Differences Between a Criminal Case and a Civil Case