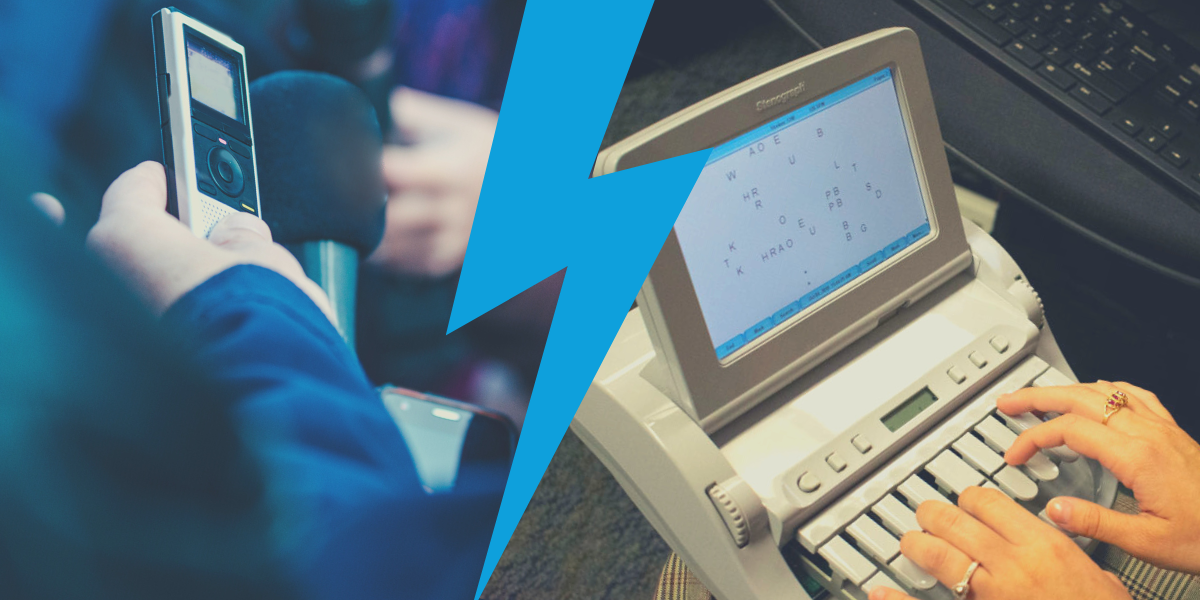 Over the years, technology has revolutionized our world and our daily lives. It has created amazing tools and resources, making our lives easier, faster, and better. Thanks to technology today we can ask our phones for directions, there are vacuums that clean all on their own, and it looks like pretty soon cars will be driving themselves. Yeah, like it or not, taxi drivers, plus security guards, receptionists, construction workers, farmers (and many more) will be replaced by AI over the next 10 years. Luckily, court reporters won’t be replaced by technology any time soon, and on this page, you’ll find out why!

COURT REPORTER – a person who can write at least 225 words per minute on a stenography machine at very high accuracy. While digital recorders can record rapid speech, they usually do it INACCURATELY. For instance, a digital recorder won’t know the difference between the words “heir” and “air” or “cite”, “site” and “sight”.

On top of that, voice recognition cannot distinguish between multiple speakers, it cannot understand different accents, cut out background noise, stop for clarification, prevent multiple people from speaking at the same time, or clarify technical terms. A stenographer is a trained listener who can heal all kinds of speech, ask the speaker to repeat a sentence or speak louder, and write everything clearly and accurately.

It’s apparent that current technology is still very limited and cannot compete with the accuracy and reliability of a professional stenographer.

Oops! The Digital Recorder Shut Down

Another major reason why human court reporters will never be replaced by digital recorders is that humans are reliable, while machines aren’t. In spite of technological advances, digital recordings frequently malfunction or shut down entirely during a proceeding, which may cause missing recordings, and huge portions of the proceedings not being captured properly. For example, a Kentucky judge had to rehear an entire murder trial in 2010 after the court’s digital recorder malfunctioned and there was no stenographer during proceedings.

Hiring Stenographers vs Digital Recordings: Which One is Less Expensive?

Are digital recordings of courtroom proceedings less expensive than hiring a court reporter? Well, many legislators believe that technological voice recording would cost less than hiring a court reporter to do the same job. However, that’s not the case. After the initial purchase of the recording system, you then have to pay for it to be hardwired. In addition to these costs, you will need to hire an IT professional, who would handle any issues that arise. On the flip side, court reporters are paid per case, and per transcript. This is much less than paying for expensive and ineffective software.

With the rise of robotics and artificial intelligence, it comes as no surprise that so many people are worried about their job security. Obviously, in a few years, many human jobs will be replaced by AI, but that doesn’t mean that it can take over all human jobs. For instance, court reporting is one of the jobs that technology will not be replacing any time soon. That’s because robots cannot yet fully replace their skills and experience.

Hire a Court Reporter Even 30 Minutes Before the Assignment Time

Court Reporters in Seattle at Your Fingertips